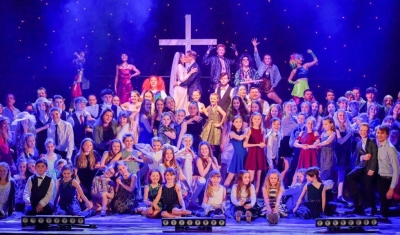 Rubber Chicken Theatre staged hit musical The Wedding Singer from scratch in a remarkable 11 hours and 59 minutes! The turnaround and performance at Stirling’s MacRoberts Art Centre on Sunday has been recognised by Guinness World Records. A cast and crew of nearly 200 people aged eight to 70 took part in the challenge.

Creative director Pamela Mackie said: “From the moment we opened the mystery box of scripts at 7.30am to find out what show we would be putting on, until curtain up at 7.30pm it was all hands-on deck. We had just 12 hours to pull together the entire show, from learning lines, songs and choreography, to organising costumes, lighting, sound, set and props. We’ve done a show in a week before, but nothing can prepare you for a once in a lifetime challenge like this. There might have been a few ruffled feathers, but our chickens kept their heads about them to pull the challenge off.”

Rubber Chicken Theatre was announced as the new world title holder by adjudicator Sofia Greenacre. The company shaved two and a half hours off the previous world record set by an American production last year.

Ms Mackie said: “I’m incredibly proud of what we have achieved as a theatre family today. It was a huge team effort and we’re feeling on top of the world.”

Read 836 times
Tweet
More in this category: « Snowdrop Walks at Kilbryde to 15 March Police Scotland consultation »
back to top