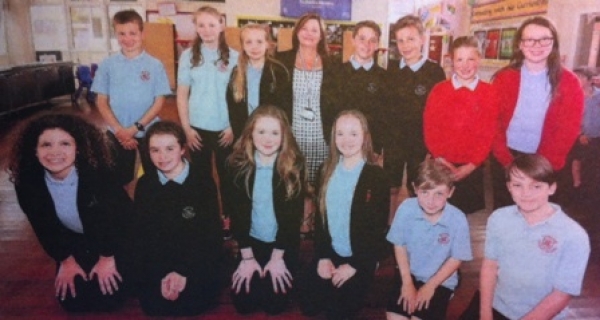 Stirling Observer article about the 'mystery owner' of Holmehill 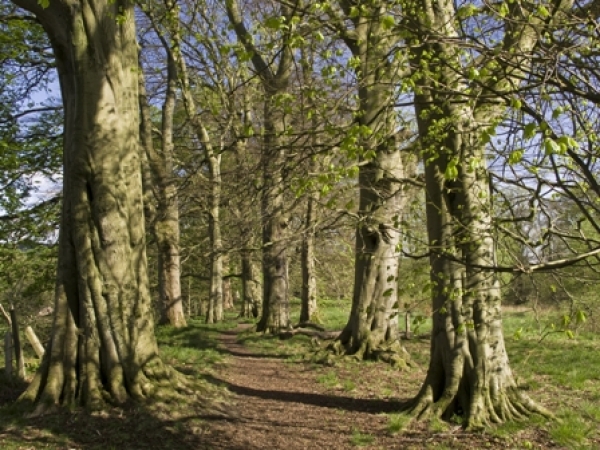 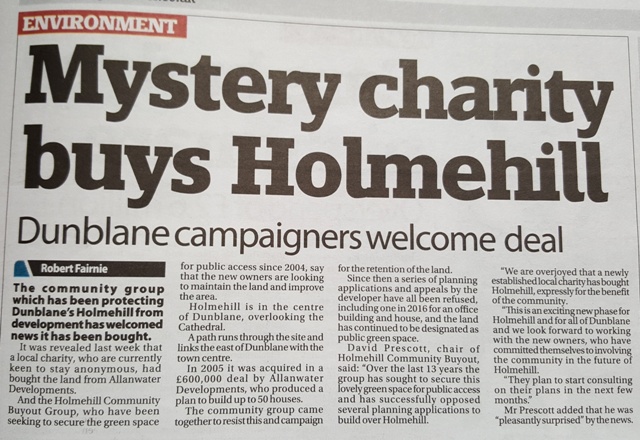 The Press Release from Holmehill Ltd

The community group that has been protecting Dunblane’s Holmehill from development for more than a decade was told on Thursday 7 June that Holmehill has a new owner – a local charity that is intent on maintaining and improving the area.

David Prescott, Chair of Holmehill Community Buyout said - ‘Over the last 13 years, the group has sought to secure this lovely green space for public access and has successfully opposed several planning applications to build over Holmehill. We are overjoyed that a newly established local charity has bought Holmehill, expressly for the benefit of the community. This is an exciting new phase for Holmehill and for all of Dunblane and we look forward to working with the new owners, who have committed themselves to involving the community in the future of Holmehill. They plan to start consulting on their plans in the next few months’.

Note for editors:
The Holmehill Community Buyout Group was formed in 2004 to buy Holmehill using the, then new, Land Reform legislation. In 2005, they took Scottish Ministers to court in a landmark case to assert our right to pursue community ownership of the land. Since then the group has contributed to work aimed at improving land reform legislation.

In 2005 Holmehill was acquired by local developer, Allanwater Developments, who produced a plan to build up to 50 houses. In response, the local community came together to resist this and to campaign for the retention of - what is seen locally as - an important green space in the heart of the Cathedral city.

Subsequent planning applications and appeals by Allanwater Developments were all refused and Holmehill has continued to be designated at Public Green Space in the Local Development Plans.

Contacts
David Prescott (Chair) This email address is being protected from spambots. You need JavaScript enabled to view it. 07944 680648

Community-led organisations not currently in receipt of a CCF grant are invited to apply for funding of up to £150,000 per organisation, per year for 2019/20 and 2020/21. The deadline to submit an Expression of Interest, the first stage of the application process, is 5pm on 3 August 2018. Current CCF Grant Recipients should contact their CCF Development Officer at Keep Scotland Beautiful.

Development Grants of up to £1,000 are available to support community-led organisations not currently in receipt of CCF funding identify and scope out potential climate action projects. There are monthly deadlines from June to August.

Keep Scotland Beautiful manages the CCF on behalf of the Scottish Government and is running CCF Information Events in June and July.

All potential CCF applicants should refer to the CCF website or contact Keep Scotland Beautiful for full information about criteria, eligibility and deadlines

Find out more at www.keepscotlandbeautiful.org/ccf

For 2019/20 some CCF Grant Recipients will receive match funding from the European Regional Development Fund, part of the European Structural and Investment Fund.

Could you spare a couple of hours a week as a volunteer befriender?

We are looking for volunteer befrienders to build relationships with people living with the early stages of dementia in the Stirlingshire area. We match befrienders with people who have similar interests so they can be encouraged to pursue loved hobbies or supported so they can build the confidence they need to take up new hobbies. This might be visiting a garden centre, having a walk or even just having a coffee and chat in the person’s home for two hours per week (full training, ongoing support and expenses paid).

If you are interested, please contact Gisele at Town Break on (01786) 476797 or by email This email address is being protected from spambots. You need JavaScript enabled to view it.. 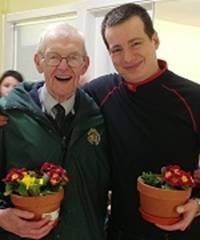 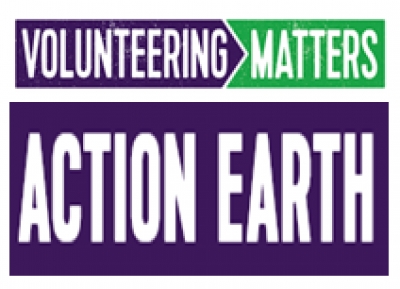 Read all about the Action Grants

Go to the website for Volunteering Matters Action Earth Grants 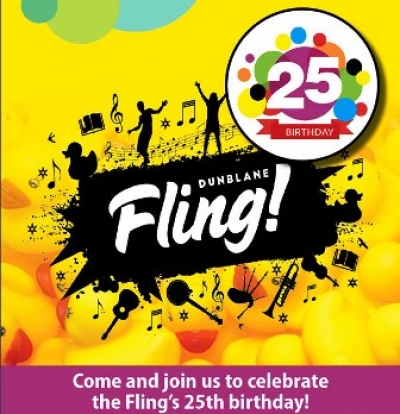 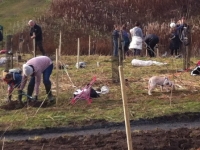 Article by Robert Fairnie from the Stirling Observer 9 May 2018 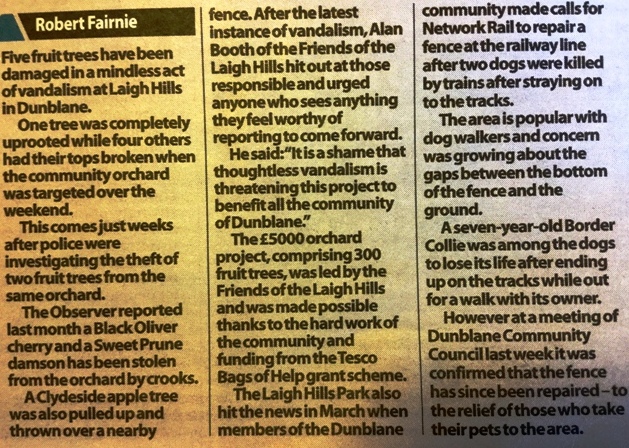 Article by Robert Fairnie from the Stirling Observer 18 April 2018

Two fruit trees have been stolen from a community orchard in Dunblane. Police are investigating after a Black Oliver cherry and a Sweet Prune damson were dug up and taken away by crooks last week. Those responsible would have had to cart the trees, complete with stake and protective netting, out of the park without being detected. A Clydeside apple tree was also pulled up and thrown over a nearby fence but has since been recovered and replanted. All three were introduced to the Laigh Hills by volunteers over a weekend in December as a community orchard, comprising 300 fruit trees in total, was created.

The £5000 project, which was led by the Friends of the Laigh Hills, was made possible thanks to the hard work of the community and funding from the Tesco Bags of Help grant scheme. Police visited the orchard after last week’s theft and they want anyone with information to come forward.

Alan Booth, of Dunblane Community Council, said: “That somebody would do this is disappointing for all those who gave up their time to help plant the trees. “We would urge users of the Laigh Hills to join Friends of the Laigh Hills group and notify us if they see anything unusual – be that things going wrong that need attention or new sightings of plants or animals that they want to share. “The good news is that the vast majority of the 300 trees we planted in December are now thriving.” The community orchard is thought to be one of the biggest of its kind in the area with a vast collection of trees planted to produce fruit in years to come. The trees came from a specialist fruit tree nursery near Perth and include Clydeside, Scot’s Bridget, Stirling Castle, Lemon Queen, Green Chisel, Gordon Castle and Black Oliver.

Mr Booth added: “The orchard will be a great asset, encouraging wildlife as well as producing fruit for all to enjoy. “It forms part of our plans to make the Laigh Hills a better place for people and wildlife.
“We are keen to add names to the Friends of the Laigh Hills group to take this forward, so anyone who is interested in getting involved, or just telling someone if they see something going wrong, please get in touch withy This email address is being protected from spambots. You need JavaScript enabled to view it..” Members of the group are also hoping to embark on a project to plant wildflowers in the area in coming weeks too. Anyone with information on the fruit tree theft is encouraged to contact police on 101.

Rail journeys to Glasgow and Edinburgh now back to normal

Since September 2016 rail journeys from Dunblane to Glasgow and Edinburgh have been disrupted in the evenings and at weekends due to electrification works, with replacement buses being used. Futher electrification work will be undertaken overnight.  Services return to normal after 20 May 2018. Read more 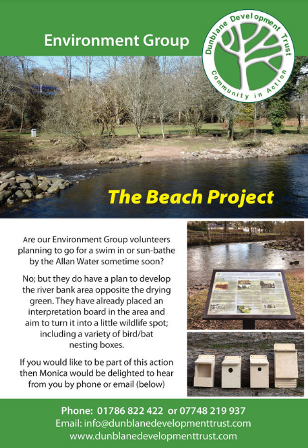 Here are the local artists that are taking part:-

A further round of the Ideas Innovation Improvement Fund has opened, with a deadline of 25 May 2018.

Applications are welcomed from voluntary and community groups, charities and social enterprises delivering projects which aim for people living full and positive lives within supportive communities.

Applications for up to £2000 for an individual organisation, or £6000 for organisations applying in partnership, will be considered.

Full details, and application form, on the attached document. 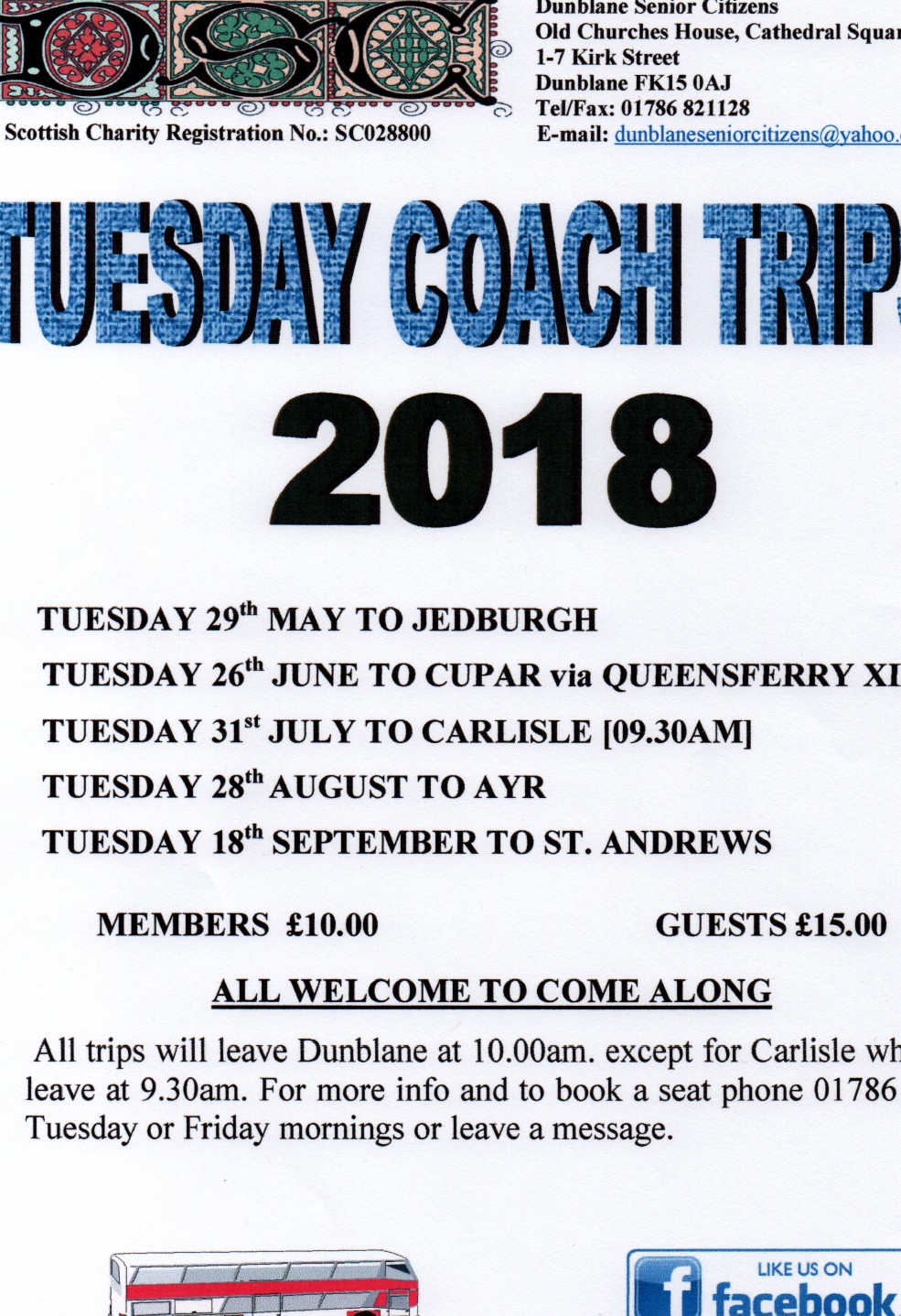 We have been advised work is progressing well with the replacing of the New Rail Bridge to the extent they are bringing the full closure date forward by 1 week.  The planned full closure for Kerse Road Bridge is being brought forward by one week. This  commenced at 6.00 am on the morning of Monday 16 April 2018. Community Engagement Team 01786 233076